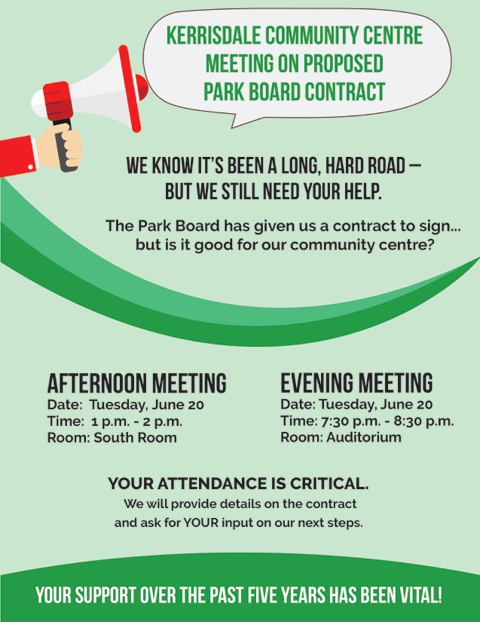 The most recent contract development process began in May 2016 and it produced a proposed Joint Operating Agreement approved by the elected Park Board Commissioners in April of this year. It is this proposed contract that we are bringing to our community for comment.

Q: Why is the Kerrisdale Community Centre Society concerned about the proposed draft of the Park Board contract?

A: The Joint Operating Agreement being presented to us by the Park Board for our signature has several serious challenges that will affect how our community centre operates. (You can find the 50+ page document at: https://kerrisdalecc.com/category/negotiations/).

If we sign this document, the Park Board will have stronger control in important areas of how we run Kerrisdale’s community centre.

Q: Kerrisdale Community Centre has an outstanding financial disagreement with the Park Board – how is that being dealt with in the context of the proposed contract?

A: There are two costly and complex financial issues that need to be resolved before we can sign this agreement, if that is what we choose to do.

For the first issue, in 2010, the Park Board came to Kerrisdale Community Centre Society and – due to a financial shortfall/budget cut on their side – asked us to pay a portion of the costs for some staff positions. In addition, they asked us for a cash grant. We complied with this request and, at that time, signed a one-year-contract for that year only.

The next year (2011), we agreed, again at the request of the Park Board, to pay the portion of the costs of some staff positions for one year, but did not include a cash grant.

The Park Board believes that we owe them for the years 2012 – onwards.

We have legal advice and substantial documentation that supports our position that there was no agreement or contract in place after 2011 and that we owe nothing to the Park Board for these positions.

For the second issue, in 2011, without the agreement or consent of Kerrisdale Community Centre Society, the Park Board converted several auxiliary staff shifts to three regular part-time positions. We have refused to pay the Park Board the additional expense for these positions from the beginning. Now, the Park Board is billing us for it. We have obtained legal advice and feel justified in our position that we do not owe the Park Board any money in relation to this issue.

Q: You have been pushing back on the Park Board for a long period of time. What achievements have been made with this agreement?

Some of the achievements and progress we have experienced are:

These were important revisions to the contract. However, there are other changes that need to happen. The changes we want done are in the best interest of our community.

Q: What are the financial ramifications of signing this contract?

A: The Park Board’s proposed agreement will increase the costs to our association by roughly $300,000 each year. Included in these additional costs are:

These are funds that we rely on for programming and services at our community centre.

Q: This has been going on for a long time; why is it so hard to get a contract that works for our community centre?

A: That is a good question. We have asked ourselves that quite a bit over the last five years of this challenging process.

We can’t speak for the Park Board, but what we can tell you is that, with your support, we have spent the past five years fighting to make sure that the Joint Operating Agreement (contract with Park Board) works for our unique community, as well as for the Park Board.

Q: Is this issue because the Park Board has a lack of respect for how community centres are run?

A: We can’t speak for the Park Board.

We have a huge amount of respect and admiration for our volunteers – from those who work on the front lines in the centre to those who take on leadership roles in the Kerrisdale Community Centre Society and who serve on the Board. These are committed individuals who give up time with their families and friends and who take time out of their busy lives to contribute to our community centre and our community.

We make a huge difference in the lives of every person who walks through our doors. From exercise classes to our lunch programs and everything in between, they happen because we have a strong, caring, involved community – and because our volunteers are the best. In fact, our community centre has been recognized for its excellence. According to the Vancouver Courier Readers’ Choice Awards, Kerrisdale is “Vancouver’s Best Community Centre for 2017.”

Kerrisdale Community Centre and all community centres in the city deserve respect for the work that we do, for our volunteers and our volunteer boards and committees.

Q: If you sign this Park Board contract – what happens to the lawsuit against the Park Board that Kerrisdale is involved in?

A: Before we can sign this contract (and that has not been decided – we need your input on that), the Park Board requires that we relinquish our court case (which asks for, among other things, confirmation of the Society’s right to use the facility or receive financial compensation).

Q: What happens if Kerrisdale doesn’t sign this contract?

A: If we do not sign the contract, we would need to decide whether we will move forward with the lawsuit. If we do that, our expectation is that it would take two or three years, but that ultimately, we could face the possibility of eviction by the Park Board.

Q: Can the Park Board really evict us if we don’t sign the agreement?

The Park Board has told us that if we don’t sign the agreement, they will evict us.

Q: Are the other Community Centre Associations (CCAs) signing this contract?

A: While we don’t speak for the other CCAs, to the best of our knowledge, at the time of writing these FAQs, two Community Centre Associations out of 20 have signed the agreement.

The other CCAs have not yet stated their decision on what they will do.

Q: What happens if some CCAs sign and some don’t?

A: That is a question for the Park Board.

We are a part of the group of 14 CCAs that have spent the last year working together to address what we feel are serious issues with this agreement. We can’t tell you what other CCAs will do. It is our understanding that, at this point, many of them have not come to a decision about this agreement and whether to sign.

Some CCAs may decide to sign and some may not. Right now, we are focused on engaging our community and asking for your input on whether the Kerrisdale Community Centre Society should sign this agreement.

Q: What happens next?

A: We are in a tough spot with this contract. The Park Board wants us to sign the agreement by September 30, 2017. Right now, we have several options:

Once we have clear direction from our community, we will know what our next steps should be.

Q: What does the Kerrisdale Community Centre Society Board of Directors think that we should do?

A: We think that over the next three months we should communicate the changes we want to the Park Board. We feel strongly that it is important to do whatever we can to have the changes that we have proposed included in the agreement so that it is a foundation for a good working relationship between our community centre and the Park Board.

We need to carefully review the opinion our lawyer gives us. We have come so far, but the agreement isn’t there yet. We believe we would be letting our community down if we did not continue to push back on the Park Board while we have this opportunity.

However, as has happened since we founded the society more than seven decades ago, we listen to our community – and your input will direct our next steps.

Please visit our website regularly: https://kerrisdalecc.com/negotiations-with-park-board/. We will share news, updates and other information regarding this issue with you there.